If you’re a regular visitor to this site, you’ll see that I’ve changed the header image. After half a year at this blogging business, it seemed to me that the site needed something visually fresh. WordPress regularly introduces new “themes” or blog templates but none so far quite duplicate what I like about my current Cutline theme.

So I’m sticking with Cutline, but the header can be changed, and perhaps for now, that’s fresh enough.

Farewell, then, to the giant trees, with their intimations of both roots and reaching, with the hints of gratitude, sense of dependence, and interconnectedness I wanted for a blog with the odd title, “Borrowing Bones.” And thanks to daughter C., for sharing a portion of her photo these six-plus months. She took it on a bike trip from Oregon to California. I’ve included the entire photo below, just to keep it in the record. 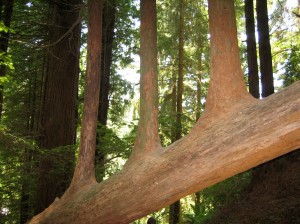 For the next months, I’m going to use for my header a series of images taken from an album of postcards my grandfather, Heinrich Harder, brought with him to Canada in the early 1920s. He had a collection of more than 80 postcards, most — though not all — related to places he saw while serving as a medic at the Russian southern front during World War I. He worked on the trains that transported the wounded from battlefields to hospitals further inland.

Several Christmases ago, I spent happy hours researching the sites of my grandfather’s postcards, as well as looking for references to them in the extensive correspondence he conducted with my grandmother, to whom he was then engaged.  (I described this in an article, “Mementoes of a Faraway World,” in The Mennonite Historian.)

Although these images may not feel quite fresh in the literal sense of the word, being rooted in history and thus rather old-looking, they also relate to that bigger sense of interconnectedness we share with the past, and loved ones, the common bones of our humanity and of the world.

The first header image in the series is a portion of a postcard of the Mennonite orphanage and school at Grossweide, Molotschna, Ukraine, founded in 1906 by Abraham A. and Justina Harder. It cared for up to 80 children at a time. The card was dated 1915, and sent in thanks for a 10 Ruble contribution to the institution by my grandmother’s young women’s group. Here’s the entire postcard, as well as a photo of two pages of my grandfather’s album. 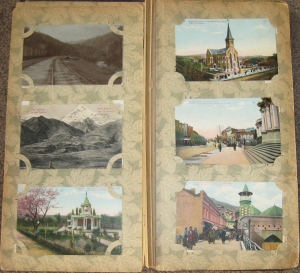 5 thoughts on “Changing the look”