I’ll be reading on the Fiction Writers stage at Word Vancouver, September 29, 2019.

Manitoba launch of All That Belongs at McNally Robinson’s, October 5, 7 p.m.

Events with All That Belongs in Saskatoon (October 8 at D’Lish by Tish, 7 p.m.) and Calgary (tba).

“Mask” is included in the Rhubarb Anthology, Nine Mennonite Stories, selected by David Bergen. I’ll be reading at the launch in Winnipeg.

Dora’s entry was chosen from 221 submissions by our three final judges, Pauline Holdstock (North Saanich), Greg Hollingshead (Toronto), and Ann Ireland (Toronto). Dora was awarded $1,500 in prize money, and her novella will be published in the Summer 2014 issue of The Malahat Review.

Of “Mask,” the judges said: “[it] is a deftly written, deeply affecting account of the physical and psychological ramifications within one family struggling to live with the wounds inflicted by war. This is the work of an honest writer, who has handled sensational, painful material with insight and compassion.”

An interview with Dora Dueck on her Novella win will be published in the June edition of Malahat lite.

NEXT EVENTS (past events are listed below books section)

Reading at “A poem, a paintbrush, and a harp: an evening of artistic reflection” with Angeline Schellenberg, Joanne Epp, Johanna Handford, Cyndi Koshowski, Dora Dueck, May 2, 2014, at Light of the Prairies Centre. More info here: http://www.lightoftheprairies.com/documents/artisticreflection.pdf

My most recent book, a collection of short fiction called What You Get at Home (Turnstone Press) was launched October 2 in Winnipeg. (See more at “What You Get at Home” page on this blog.) It landed on the Winnipeg’s “Best of the best” list for 2012 and McNally Robinson’s top 10 Manitoba bestsellers, and was the winner of the High Plains Award in the short story category.

“illuminating and sympathetic portrayals… Everything about [this book] is engaging” (Rhubarb)

Winner of the 2011 McNally Robinson Book of the Year Award and shortlisted for the 2011 Margaret Laurence Award for Fiction at the Manitoba Book Awards.

“a testament to the pleasure of pure storytelling… a story of warmth and compassion that never wavers in its quality” (jurors comments, Margaret Laurence Award for Fiction)

“compellingly draws out [the] themes… a superb job of using Maria’s very particular situation…to limn the contours of human relationship… here’s hoping [Dueck] will find the space to write another novel of this caliber. And soon.” M.S. Mock, Mennonite Weekly Review

” I could not put [the book] down and several weeks after reading… Maria lingers in my mind. She will be there for a long time.” E.N. Schroeder, Mennonite Historian

Under the Still Standing Sun. A novel by Dora Dueck. Kindred Press, 1989.

“her accomplishment in this…novel is considerable” Mennonite Quarterly Review

“It maps with words the astounding richness of what it means to be Christian in this relatively new nation.” Richelle Wiseman, Centre for Faith and the Media

“Do thank God that someone keeps trying to gather us briefly under one roof…a mirror of daily encouragement.” Julie Lane-Gay, TAP Review

“I urge you to find one, buy it and read it…a love story” Lindor Reynolds, Winnipeg Free Press

A Time to Remember: The Story of Reverend B.B. & Liese Fast. Biography, 2009. As written by Dora Dueck based on the research of Helen Isaak, Herta Voth, Margaret Harder, and the children of B.B. & Liese Fast

MA Thesis: “Print, Text, Community: A Study of Communication in the Zionsbote, A Mennonite Weekly, between 1884 and 1906.” (For MA, joint from Universities of Winnipeg and Manitoba), available here.

Speaking and reading in Carman, Man., May 15

Reading at Winnipeg celebration of the Toronto Women’s Bookstore, October 30, 2012.

Reading at “An Evening at Margaret Laurence House” in Neepawa, Man., Friday September 28, 7 p.m. with Laurie Block of Brandon, Chris Rutkowski of Winnipeg, and a local resident reading from Margaret Laurence’s works. The event coincides with the launch of a new Neepawa writers group.

April 17, 2011 at 8 p.m. Manitoba Book Awards at the Centre culturel franco-Manitobain, hosted this year by Catherine Hunter. This gala event is free and open to the public. This Hidden Thing is shortlisted for the McNally Robinson Book of the Year Award and the Margaret Laurence Award for Fiction.

Sunday, April 10, 2011, a conversation with Keran Sanders about This Hidden Thing to air on CBC’s Morning Show, andpost at the Manitoba Scene website.

Reading from This Hidden Thing in Winkler, Man.

Launch of This Hidden Thing at McNally Robinson’s, Prairie Ink restaurant, 8 p.m. (Please note the May 19 date is a change from what I announced in a post earlier.)

Here’s the Hidden Thing flyer with an overview, and below, the cover, front and back. 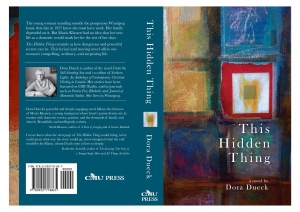 February 7, 2010 Service of prayer and lament An inter-Mennonite group of volunteers will sponsor a prayer and lament service for the Manitoba Colony, Bolivia women and girls who have been victims of recent sexual assaults and abuse. The service will be held, Sunday, February 7 at 7 p.m. at Morrow Gospel Church, 755 St. Anne’s Road, Winnipeg. It is open to all and will include a free will offering for a new women’s shelter in Bolivia.

One Response to Events