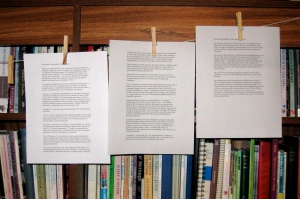 It’s Saturday and I’ve finally got a reasonable draft of my last editorial hanging on the line.

For anyone who doesn’t know, I’ve been working this past year as interim editor of the MB Herald, a 36-page monthly magazine, print run 16,000, which goes into the homes of  members of Canadian Mennonite Brethren churches. For some years I worked as associate editor, and then I “retired,” to do my own writing projects, but in January 2009 I returned to fill in while editor Laura Kalmar was on maternity leave. I’m wrapping up my term with the December issue, which is underway; Laura returns for the January issue.

I’ve enjoyed being back for the year, except, I’d have to say, for the editorials. Many kinds of writing, there’s a structure or strategy about them, and once you figure it out, it’s not so hard. But I’ve never quite figured out the formula that would get me easily through an editorial. In our particular magazine it sits near the front, so it often acts as an introduction to the issue’s theme, but it’s also expected (I assume) that one might have an opinion/position of some sort on some aspect of the topic, and now and then about other things as well. The bits of advice I’ve picked up from other editors is that it should express a view but also be open-ended. Or something like that.

Good editorial writing may be a gift, or a temperament. Fellow editor Doug Koop (ChristianWeek) doesn’t seem to find it hard and does a great job, and I always admired the rolling through still firm style of former MBH editor Harold Jantz.

In the editorial on the line, I’m weighing in on the recent MB study conference held in Saskatoon. I opined (a word I’m using in honour of another editor friend who was fond of it) that it was a good event but we need to address how our having too little time talking together in a large group setting relates to the value we say we put on “community hermeneutic.”

The trouble with editorial writing is I have to figure out what I think, and it has to be “true,” not just there for effect. It has to be what I’m willing to commit to saying. What I think about a matter is the hard part and I can only write my way to it — but it involves too many starts and stops and procrastinations and re-writes and then revisions. This quote from one of writer Flannery O’Conner’s letters says it best: “Like the old lady, I don’t know so well what I think until I see what I say; then I have to say it over again.”

Eventually I’ve been happy enough with most of them. But now the last one’s on the line, almost ready, and I’m glad.

(Re. hanging on the line: this is one of those little writing tips I’ve learned along the way. Once you have a draft of something you have to find a way to see it freshly when you come back to it. It helps to spread it out on the floor or table, or hang it up, and maybe read it backwards — last page first, I mean, and so on. It also helps to switch the column widths from draft to draft, or change the font.)