I’m coming back today to the topic of memorials and commemoration, which an earlier post about the new Mennonite memorial in Ukraine raised to my mind.

Back in the 1990s, when I returned to university to do a Master’s degree in history, cultural history seemed in the ascendency, and within cultural history, histories of commemoration were “hot.” I read books such as Michael Kammen’s Mystic Chords of Memory and and Jonathan Vance’s Death So Noble: Memory, Meaning, and the First World War, and learned about the work of Eric Hobsbawn, Maurice Halbwachs, and Michael Foucault, discovering the possibilities around the forming and contestation of meaning, around memory and myth. It was fascinating stuff. I learned smart new words like “hegemony” and “liminal” and enjoyed using them, at least as long as I was hanging around the university with those who knew them too.

But seriously, it was exciting, thinking in so many previously unconsidered directions at once. I’m just now looking through a pile of research notes I kept for a paper I wrote during that time, on Winnipeg’s celebration, in 1927, of the Diamond Jubilee of Canada’s Confederation, and I have to say, it makes me homesick to be studying again. 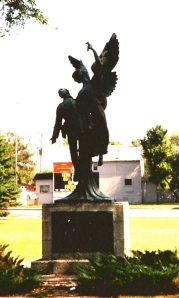 I learned that commemoration is never neutral. Vance’s work on how World War I would be remembered, for example, had me driving around Winnipeg taking photographs of some of the monuments erected in memory of that war, and as the CPR memorial of an angel lifting a “fallen” soldier  indicates, there was clearly a Christian narrative imposed on that bloody conflict, for the purposes of comfort in the face of such a useless waste of lives, no doubt, but also in the service of the glorious nation-building project.

Whether in the long and multifaceted process of public remembering of a war, or a single event celebrating an anniversary, or a set-in-stone monument, we make choices in commemoration. We involve various purposes, power, and politics. Sometimes in commemoration there’s a subversion of dominant mythologies, sometimes a reiteration or underlining of them. Past, present, and future interact in various ways.

So, the new Mennonite memorial. What’s it all about?

This question should not be assumed to be critical. But it should be considered as a question.

The story of the Mennonites in the former USSR — the story of everyone in the USSR, in fact — is certainly a story of missing persons. I like what the monument says about that. Nor is it hard, as my brief musings over one photograph in that earlier post demonstrated, to put my family’s own “missing persons” into it — personal history meeting public history.

The monument stands in a former central Mennonite village, in a park surrounded by buildings erected by Mennonites and still in use. It draws attention, according to the news release, to “the human costs of a totalitarian system and tells the larger story of tyranny, suffering and oblivion.”

The commemorative text’s use of “Blessed are those who mourn,” from the Sermon on the Mount — which is often considered at the heart of Mennonite understandings of faith — opens any number of lines of reflection.

But who is it really for? Why there? Why for Mennonites? Because they’re gone?

What will Myrna Kostash think, she of the biting “Lord, History Falls Through the Cracks,” published in Rhubarb (Fall 2008):

So, when the time comes for the melancholic Ukrainian peasants to rise up against their masters and take back the land, the Mennonites will say they are lost….

…I have thought of you [Mennonites] as salt of the earth, growing out of it like the infinitely renewing limbs of willow from which we weave our fences. But yours is a story of flight and the roots spread shallow: you have to be able to get up and go when you feel the pressure, the danger; you have to be able to shake off the dirt as though this earth were not beloved. Maybe that’s what it means to be Ukrainian instead: to be everlastingly of this homeplace.

You left and we grew back. You are utterly gone. No one remembers you….

Land. You had it and we didn’t.

Now we’re back, in a small way, with humanitarian and spiritual programs (examples: The Mennonite Centre, and MBMSI Ukraine.) With tourists. With a monument.

Kostash reminds that the land was Mennonite for only 128 years when the Revolution came. “A blink of the eye: that’s how long it had been Mennonite.”

What do we think of this memorial for a blink’s-long sojourn?

It’s low to the ground; it’s in a park. Surely children, curious and delighted, their cries of play ringing in Ukrainian, are going to climb into those spaces — if they can get away with it — and fill them with laughter and hope and the future. Will that be a welcome subversion of our own memorial?

I’d love to hear your thoughts.

7 thoughts on “The power of commemoration”