Today, for the last time, I turned the lock of the small suite my parents moved into nearly nine years ago. It’s empty – everything of theirs given away, sold, or piled into a spare bedroom at our house!

My father died more than a year ago. My mother had hip surgery in October and, unable to return to independent life, is waiting for a bed in the Personal Care Home on the other side of this complex. Yes, she’ll return to her beloved Donwood Manor, but never again to these two-and-a-half rooms, to these particular conditions.

Eugene Peterson speaks of “conditions” in the opening pages of his latest book (a memoir called The Pastor). He means the fact that his work — with the “immense mysteries” of God and souls — was carried out in place and time. Place and time in their most specific dimensions. There’s no avoiding the conditions, he says, and so he wants to be “mindful” of them.

Closing down my parents’ suite has pushed me into mindfulness also of the recent conditions of their lives.

Even after I had a family and home of my own, I always enjoyed being at my parents’ place. Their personalities, and therefore their furniture and things, exuded welcome, comfort, and familiarity. But it feels strange to be touching every item now, sorting, judging what to dispose of and what to keep. And then disposing of or keeping it.

The suite is small, less than 400 square feet. It’s remarkable what they managed to cram into it. I recall their 2002 move in, for example. Mom, whose days of feeding a family of eight children were long over, brought along her canning jars, and Dad, retired from the pastorate and most public duties, brought along six suits. How painful it was to watch him agonize over the need to cull commentaries and books and the tools of his pastoral trade. (We now know he was also in the early stage of Alzheimer’s disease.) And oh, how many books still came along with them!

As real space and time shrank with their move into the suite, and with their growing immobility, I noticed that spatial references to a world much wider and distant increased. Dad spoke more often of the irrigation fields of southern Alberta and how proficient he’d been as a young man at striding across them, opening and closing the water channels. He spoke of his prowess as a baseball player, and the distance his balls flew when he hit his regular homers. Mom reminisced with her four sisters, all now living close to one another again, about running through the bush, walking to school, clamboring about house and barn on their Manitoba farm.

Around the time my parents moved into the suite, they planned for an even smaller future, physically speaking, but a larger one nevertheless. They shopped for graveyard plots and were enthused to make the purchase, as if they’d finally found the perfect vacation condo. They described the arrangement of trees in their chosen corner and recited the names of others already “resting” there. Then I noticed they began to read books about heaven and to talk about it more often. My mother, in fact, although she’s been sad about it on occasion, has been surprisingly unsentimental about giving up the suite. “I find I’m thinking more about heaven than that place,” she said the other day.

These, and so many other memories — of every diminishment, of every enlargement — have been in my mind as I’ve been clearing this, their late home. But Saturday, washing the floor in the now empty suite, it looking so unbelievably small, I had nothing left, it seemed. Only an almost visceral sense of Mom’s efforts across this floor the last months to get from her reading/TV chair to the bathroom. Over and over that slow, pain-filled, trek with a walker, all the awkward and interminable efforts at either end of the journey — to get up and down and up and down again. Losses, the floor was telling me. Just losses. The reality of large and small, present and past, inverted, completely confused for the infirm and the elderly.

Today, though, when I locked up, glad to be finally finished, and the morning sun pouring in through the east windows, I felt in that space a glimpse of the lives my mom and late father had lived in that place, diminished yet as deliberate and expansive as they were still able to be. Before I turned the lock for the last time, I said a prayer of gratitude for suite # 601 and 2002-11, their recent time and place, their recent conditions. 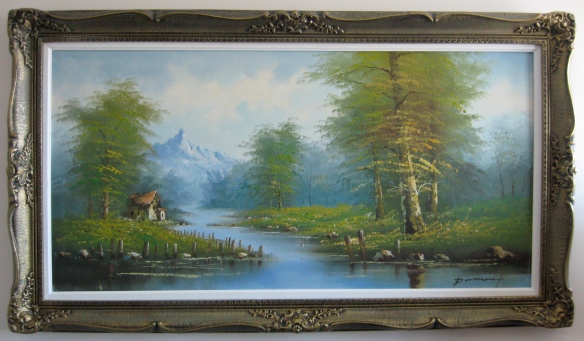 This picture hung in quite a few of my parents' various homes.

9 thoughts on “The recent conditions of my parents”