I was recently alerted to a Newsweek article on family squabbles around the legacy of Billy Graham. I have no particular comment on that, but it did remind me of how my denomination got on board the Billy Graham train. 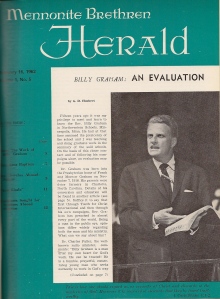 In 1962, in the MB Herald – the then-brand-new English language magazine of Canadian Mennonite Brethren – there were no less than three articles on the rising evangelical star and an appearance on the cover, as well as other “notes” throughout the year. I gather from this coverage that there must have been some questions about how MBs might respond to the Graham phenomenon; certainly public opinion about him varied.

The emphases of these articles can probably tell us something about MB concerns and values of the time. Three matters seemed especially important: his finances, his humility, and his relationship to theological liberals.

G.D. Huebert’s “Billy Graham: An evaluation” (Feb. 16) assured readers that charges of Graham being a multi-millionaire weren’t true; he made a “regular salary” of $ 15,000. The Billy Graham Evangelistic Association was incorporated as a non-profit, Huebert continued, and its finances were audited.

A second article in the same issue told something of Graham’s biography, including newspaper owner William Randolph Hearst’s order to “puff Graham.” Since then, the article went on, there is “probably no better known Christian in the world.” This second piece detailed the evangelist’s salary too, as well as the total receipts and expenses of the crusade in Philadelphia.

Graham’s humility was also emphasized. Then, in the June 8 issue, a “World View” (short notes presumably written by editor Rudy Wiebe) referred to the Chicago campaign. “Whatever one may think about Graham,” it said, “one fact remains clear: he claims no credit for himself.”

In the June 29 MB Herald, Leslie H. Stobbe, former editor of the Mennonite Observer, who had been an “active participant” in the Chicago event, wrote a report and strong personal endorsement of Graham. One of the questions he sought to answer was, “Is Graham liberal?” – this in reference to crusade associations with those “reputedly liberal in theology.”

Stobbe stated that far from Graham compromising, “he was taking every opportunity to assail modernist and neo-orthodox theological weaknesses.” He also stated that counselor trainees coming from “non-fundamentalist” churches began to be converted. Graham used “neo-orthodox terminology” in some sermons, Stobbe said, only to point out that he “meant” a term used by fundamentalists. The word “commitment,” for example, meant to be “saved.”

The only hint of critique about Graham that I came across in my perusal of the MB Heralds of 1962 (which I did for interest’s sake about a year ago, making a few notes in the process) was early in the year, in a “World View” item. It noted that Billy Graham had said, at a Christmas service at the Pentagon, “Jesus Christ was not a pacifist and freedom must be defended by war, if necessary.” The writer (again, I’m assuming Rudy Wiebe, editor) continued, “One wonders on what passage of Scripture he can base his declaration of Christ’s position.” But the note ended somewhat enigmatically: “But if we are in no position to preach this to the leaders in the Pentagon, we are in even less position to throw stones at those who are.”

3 thoughts on “Deciding about Billy Graham in 1962”