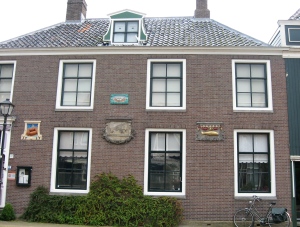 The tour begins while we’re still bleary from the flight to Amsterdam, at the Honig Breethuis (house/museum) in Zaandijk, on the river Zaan and across from the Zaanse Schans where “old” Holland lines up in a series of picturesque windmills and where we’ll go next. I hasten to add that windmills are decidedly part of a Mennonite Heritage Tour, early Mennonites being good drainers of water and makers of dikes! As for a personal connection, my married name Dueck (with its variations Dyck, Dyk, Dick) probably comes from the Flemish word dike or pond and its first bearers likely lived by the sea.

The Honig Breethuis was home to several generations of a wealthy merchant family that happened to be Mennonite. (Our guide, Ayold Fanoy, tells us this; as far as I know the museum doesn’t mention it.) Cornelis Honig owned a paper mill and Jacob Breet, the fourth owner of the house, expanded the business by acquiring other paper mills. Built in 1710, the house is now exhibited as it looked in the mid-nineteenth century. There’s the fine accoutrements of the upper classes. They also lived with steep stairs and the fear of fire.

And water. Contained, but everywhere — water. This is the Netherlands, so I shouldn’t be surprised that Neptune, the god of water and sea, appears as a decorative figure. (Though I am; I’d assumed the Mennonites left Greek and Roman mythology behind.) Then when we view a row of portraits on the wall, I’m startled to hear that one of the daughters – was her name Grietje? and was she 21, or 22? – drowned while washing clothes in the river.

View from the Honig Breethuis, across the Zaan River to the Zaanse Schans.

Death by laundry: if it wasn’t so tragic, it would seem comical. It’s the weight of her own clothes that sinks her. The long skirts, the layers. Carolyn Heilbrun again, reminding in her chapter (in The Last Gift of Time) “On not wearing dresses,” that the purposes of nineteenth century women’s clothing were “to attract attention and impede movement.”

The few sentences I hear about the young woman’s death are a fragment of story that persists in my imagination. In the meanwhile, I find myself oh-so-very thankful for the allowable, generally comfortable, and easy clothing for women today! On this European tour, it’s jeans and shirts. No hat boxes, no trunks to be dragged along with crinolines, stays, ruffles, or satin.

5 thoughts on “Death by laundry”