If only I were younger! Because — if I were — I might try to learn Dutch. Then I could read Anne Zernike’s autobiography, Een vrouw in het wondere ambt: Herinneringen van een predikanate, as well as the biography of her currently being written by PhD student Froukje Pitstra. 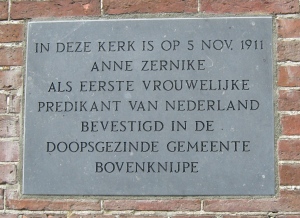 Anne Zernike (1887 – 1972) was the first female pastor in the Netherlands. The 100th anniversary of her ordination on November 5, 1911 in the Bovenknijpe Mennonite congregation, where she served from 1911 to 1915, is one of the anniversaries the Dutch Mennonites are celebrating this year.

View of de Knijpe; building with round window is the church.

Our tour group went to de Knijpe, to see the church and to view an exhibition about Anne Zernike. The village is still a pretty row of houses along both sides of a canal, though there are roads, now, for cars. Bovenknijpe pastor Jelle de Groot kindly translated one exhibition panel after the next for us, and then, in a room off the vestibule, we were served the most amazing cake and coffee by other members of the church. It was an inspiring stop! 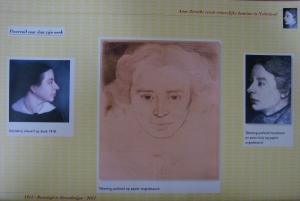 Anne Zernike as a young woman, portraits by Jan Mankes; one of the panels in the exhibition.

There is so much about Anne Zernike that intrigues me.

Her family, for example: the parents mathematicians, encouraging of their children to study and become whatever they wished, brother Frederik awarded the Nobel Prize in physics, sister Elizabeth a writer and the first woman in the Netherlands awarded a literary prize.

Anne’s interest as a child in theology and her studies at the Mennonite seminary (“questions are a kind of fire,” said one of her professors – she must have had many questions). Her baptism in the Amsterdam Singelkerk (Mennonite) in 1909. Her years in Bovenknijpe where the local poverty shocked her. Her preaching – apparently good. Church attendance increased dramatically, perhaps initially out of curiosity that a woman would stand in the pulpit.

(Froukje Pitstra notes that the debate around women in the ministry in liberal churches at the time concerned psychological rather than scriptural arguments, psychology being a new field of study at the time. Zernike also wrote in her diary, however, that she would get anonymous notes with the text 1 Corinthians 14:34. She didn’t have to look it up anymore, she commented; she knew what it said! “Let your women keep silence in the churches…”)

Her marriage to artist Jan Mankes, described as Holland’s most tranquil painter,” and his wonderful work. How he proposed — painting a bird’s nest, then saying, “I want to make a bird’s nest with you.”

The way the Great War gripped her, and the passionate anti-militarism it provoked in her. Her congregants, though, were “in a mood of casual nonchalance, as if nothing happened… Their imagination did not extend beyond the boundaries of the province, their world had not collapsed… And I felt lonelier than ever among them.”

As was custom then, Anne resigned her post upon marriage. The couple had one son. In 1920, Jan died of TB. Anne went on to do further pastoral and theological work, also writing books and translating, the poet Rilke among others. She did not again find a post in a Mennonite church, though she sometimes worked in the Doopsgezinde in Almelo. Apparently her ideas were too radical, even for generally liberal Dutch Mennonite churches. This disappointed her.

And I’m disappointed that I can’t read Dutch!

(There’s more — in translation, if you need it too! — at the Anne Zernike website.)

Portrait of Anne Zernike as an older woman, by son Beintse.

4 thoughts on “If only I were younger!”