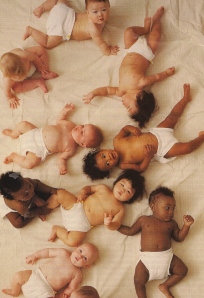 Image from 1990 Newsweek issue on the family

I was doing some research at the public library the other day, paging through LIFE magazines from 1970. Ecology — as in acid rain, etc. — was an issue of great public concern at the time, with predictions that within a decade people would be wearing gas masks to survive pollution. Even more urgent, though, was “population pollution.”

I remember this, of course, and know that my generation was profoundly shaped by it. But I had forgotten the details, and now I saw them again. A biologist saying, for example, “Each American baby represents 50 times as great a threat to the planet as each Indian baby.”

A sense of dread about the future was forming already in the 1960s. Paul Ehrlich wrote The Population Bomb in 1968 and used the image of a disease: “We can no longer afford merely to treat the symptoms of the cancer of population growth; the cancer itself must be cut out. Population control is the only answer.”

In LIFE, Feb. 20, 1970, Robert Ardrey wrote a passionate and stinging piece called “Control of Population” in which he pointed out how nature limits the number of nearly every species and said  it was time that man [sic] did the same. We might either adapt “a sane and humane program of population control,” he said, or face “death by stress.”

Ardrey went on, “We must consider enforced contraception, whether through taxation on surplus children, or through more severe means such as conception license, replacing or supplementing the marriage license.” Abortion should be freely available, he said, and aid refused to countries who “fail to control their numbers.” Alongside ads for cigarettes, Maidenform bras, and long sleek automobiles, there were articles about abortion,  vasectomies, new fears about the Pill, and a students’ crusade for ZPG (zero population growth).

These were topics of interest also to the church. In the theologically conservative Mennonite denomination we were part of at the time, a paper at a 1967 study conference addressed “Christian Responsibility in Relation to Planned Parenthood,” which to my knowledge came out positive for contraception. A 1973 article by David Waltner-Toews in the denomination’s paper, “Overpopulation and Anabaptist Values,” urged intelligent control in light of the “grim picture” of over-population, noting that Anabaptist values such as caring community validated such a stance.

So, we took it seriously and responded by having small families. Many of our friends stopped at two; some of us braved three. The few couples who had four or even more were considered very courageous indeed — or foolish.

I’m not remembering and saying all this in order to render an opinion on family size. I grew up in a large family and then had a small family, and our children are making their own family decisions, and I’m grateful for all of them. Good and faithful families come in all sizes.

Nor is my look back particularly critical, even if, as Denyse O’Leary claims in a ChristianWeek column in 2007, “the nearly universal 1970s expert freakout on overpopulation was simply wrong.” It may sound slightly defensive, in fact, though I hope in an explanatory way. The point is, we who started our families in the 70s did so within a particular milieu, one that posited fear and urgency about population matters, an urgency that combined with other societal changes such as the role of women and progress on human rights. One easily forgets, until immersed for a few hours in some artifacts of the past like magazines, how comprehensive “current” culture was/is, how it shapes us, how we make our worlds within it, whether reacting for or against.

History rarely consoles, I find, but is enormously necessary for understanding ourselves and other generations. Today the challenges of Western countries around population involve an aging demographic and low birthrates. It’s a world my generation will have to take some responsibility for making, yes, just as our parents acted on postwar optimism to create the swarm of Boomers presently turning into elders. Humbling, for all of us.

7 thoughts on “Reacting to the bomb to come”