I grew up in west-central Alberta, in rolling plains that were relatively treeless, though there were “the woods” where we sometimes played, perhaps half an acre or so in size, exciting and mysterious, and then in my teens I moved to small-town Manitoba and later to Winnipeg, which continued to press into me as “heart’s home” in the prairie provinces the sense of, well, prairie. In recent years I’ve come to understand, however, that as arbitrary as lines on a map may initially be (the provincial boundaries, for example), they form containers by which we know ourselves, and in the case of central Canada where I’ve lived most of my life, there’s a lot more in my container than prairie.

I have wonderful memories of weekend or day trips into the Whiteshell area, especially hiking the Pine Point Rapids trail with our children every summer for many years, and one truly memorable afternoon in which we bounded from one rocky crevice to another from which trees exulted near White Lake. But my larger comprehension of the place I’m a part of began more recently, with Rudy Wiebe’s memoir Of This Earth and his writing of the “boreal forest that wraps itself like an immense muffler around the shoulders of North America,” and so eloquently too of its aspens, “every one a link in our boundless circle of life.” 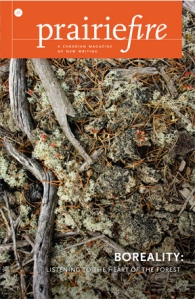 The latest round in this project’s celebration of the boreal forest of Manitoba (and Canada) is the spring issue of Prairie Fire magazine, launched last Thursday. I read at the launch as well, because the issue also contained the “regular” kind of prose and poetry PF publishes and I happened to have that kind of story in the issue. The star of the evening, though, was definitely boreality (a great word, isn’t it?) and a compelling and delightful star indeed, complete with a magnificent cake! 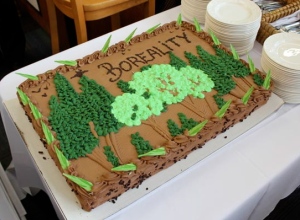 I was very much struck by an image used by Janine Tschuncky, who coordinated the project and also wrote in the issue. She said that as she was planning the team’s trips up north, she almost always had her map of Manitoba spread out on her desk. One day a friend came by and they were looking at the proportions: the boreal huge compared to the prairie. “The prairie,” they said, “is just like the crack under the door.” Janine says that since then she’s never thought of Manitoba as a prairie province.

Via the gifts of artists, my perceptions are shifting too. I’m beginning to see and learn and embrace my/our boreality.