Above the town, on the hill brow, the stone angel used to stand….  Summer and winter she viewed the town with sightless eyes. She was doubly blind, not only stone but unendowed with even a pretense of sight. Whoever carved her had left the eyeballs blank…. Her wings in winter were pitted by the snow and in summer by the blown grit. She was not the only angel in the Manawaka cemetery, but she was the first, the largest… (Page 1 of The Stone Angel by Margaret Laurence)

It was a gorgeous autumn day yesterday and since we were in Neepawa, one of Manitoba’s prettiest towns, where I’d be doing a reading later  in the Margaret Laurence house, and since we’d finished our chicken and coleslaw and chips at the Chicken Corral and  I’d changed out of my driving clothes into my reading ones in the restaurant bathroom and we still had an hour to spare, H. and I decided to find the cemetery. Riverside Cemetery is where Laurence, the famous Canadian writer, is buried, and where, we’d been told, the stone angel stands, who gave title to her book, The Stone Angel, with its memorable protagonist Hagar Shipley. The friendly waitress at the Chicken Corral, who gave us directions to the cemetery, said we couldn’t miss it.

Well, we missed it. In a manner of speaking. We drove by it at least four times and saw it and didn’t know it, because she’s not really an angel, but a shepherdess with flowers, a cross, and a sheep, and she has eyes, though lidded and lowered. And she’s not on the brow of the hill exactly, is smaller than I’d imagined, and not at the gravestone of a woman but upon that of the Hon. John Andrew Davidson.

Unable to find the angel, we’d inquired of a woman walking her dog who pointed us clearly in the direction of the shepherdess. Once again, looking for wings, we missed — or dismissed — it. Some while later, wondering by now whether we were as blind as the stone angel had been, we encountered another woman in the cemetery who immediately offered to lead us to the angel. And there she was, right where she’d been all this time — the shepherdess!

We adjusted our thinking, took some photos, and then followed the woman further, because she was eager to show us Margaret Laurence’s grave as well. How appropriate, I thought, in my freshly adjusted thinking about everything, that it’s her memorial stone (next to the more imposing family Wemyss stone) that looks over the valley and town. And if it was a tiny thrill to stand at Dostoyevsky’s grave in St. Petersburg earlier this summer, I have to say it was no less a thrill to stand at Laurence’s. 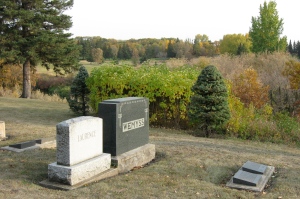 The cemetery is very attractive, and apparently even more beautiful in summer, when it’s filled with petunias. They’d just been removed for the winter, the woman told us. But even in summer, she informed us further, there were none at Laurence’s grave. “She hated flowers!” she declared.

Our guide insisted on leading us to the small memorial stone for three Titanic victims as well. (Everyone we met in Neepawa was so friendly, and the audience we enjoyed later at The House lovely and attentive.) After she’d gone on, we wandered back to the “angel” for another contemplation. A man who’d been taking pictures at the site at the same time we were, now returned as well and we engaged in some (friendly, of course) conversation. He was a local resident, wanting to capture the particular beauty of the day with its September light. Since he’d overheard us say we were from Winnipeg, he asked what we were doing in Neepawa and I said I was a writer come to do a reading. “Yes,” he said immediately, “you look like a writer.” I thought that delightful, and laughed, though I have no idea what he meant by it.

But back to the angel who wasn’t an angel but a shepherdess with a sheep. This delighted me too. It was perfect, really. Laurence was a fiction writer after all, and if this inspired her, she grabbed it and used it and transformed it. She made it what she needed it to be. Neepawa wasn’t quite Manawaka either, in spite of all the ways the writer might have drawn from it.

It reminded me of what writer Richard Ford said the other evening, during a conversation with host Charlene Diehl and writer David Bergen at one of the Thin Air mainstage events. The question was raised about personal parallels to their newest books (Canada and The Age of Hope). There are few, both answered. Ford said further he resists the question he often gets about autobiographical elements in his work; he said it seems to imply the writer’s imagination isn’t big enough to move beyond the self.

Yes. Imagination. So, in the cemetery in Neepawa, there’s a medium-sized stone shepherdess, one hand holding flowers and the other a cross-like staff. And in summer, the grounds are profuse with petunias. (“It is said that there are more flower covered graves at Riverside than in any other graveyard in North America,” says the town website, as attested to by the photograph, below.)

In the cemetery in Manawaka, on the other hand, there’s a large stone angel with unseeing eyes and and snow-and-grit pitted wings. In Manawaka, the flowers are peonies.

In summer the cemetery was rich and thick as syrup with the funeral-parlor perfume of the planted peonies, dark crimson and wallpaper pink, the pompous blossoms hanging leadenly, too heavy for their light stems, bowed down with the weight of themselves and the weight of the rain, infested with upstart ants that sauntered through the plush petals as though to the manner born. (page 2 of The Stone Angel) 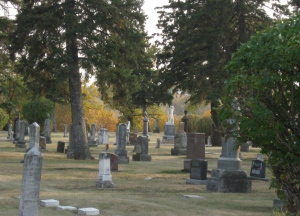 The shepherdess at a distance, Riverside Cemetery, Neepawa.

14 thoughts on “Looking for the stone angel”