A gesture and a death jostle for my attention at Borrowing Bones this morning, so I think I’ll let both of them be and if they illuminate one another in any way, well, so much the better.

Like so many other ‘watchers from afar’ I followed news of the papal conclave and the election of Pope Francis with keen interest, then satisfaction. It’s too early to know how, or if, he’ll manage the challenges facing the church, but media reports are full of pleasure at the signs of difference and new direction: the name, the simpler quarters, the calmer clothing (black shoes, not red), the washing (in the ritual footwashing ceremony just past) of two women’s feet as well as a Muslim’s, his warmth with people. Much of this is gesture, perhaps, though genuine gesture, it seems, and thus: so far so good. (I like Martin Marty’s take on it with an April Fools theme at Sightings.) 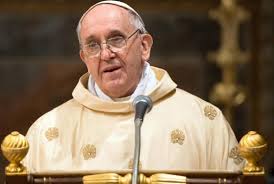 One gesture on Easter Sunday was especially moving — the one where he kissed the handicapped child. The way the child embraced him in return and how he then stayed with that embrace seemed to me not so much a sign of Pope Francis’ ‘new style’ as it was an unplanned revelation of his essential spirit. (It can be seen near the end of this short news clip.)  http://abcnews.go.com/GMA/video/pope-francis-celebrates-easter-sunday-18848773

Then I heard that Edith Schaeffer had died Easter Sunday, at age 98. Edith and Francis Schaeffer were a kind of celebrity couple in the Christian world during my youth and early parenting years, famous not just for their ministry of L’Abri in beautiful Switzerland but also for their writings. What they gave me was the assurance I needed that religious faith could be strong intellectually and also culturally rich. I enjoyed Edith Schaeffer’s writing style, somewhat rambling but smart and spiritual and packed with ideas. What is a Family gave me metaphors for the family life we were trying to create (family is a mobile, for example), ditto The Hidden Art of Homemaking with its encouragement of small gestures that enliven acts of service (a flower on the tray, for example, alongside the soup and sandwich). And the autobiographical The Tapestry, with its much wisdom tucked into the narrative.

Francis died and Edith grew older and eventually stopped writing, and then son Frank Schaeffer began writing about his parents, exposing their many faults as well as his own, and so my heroes were greatly reduced, no matter how many grains of salt I put to what he was saying. And yet, and yet, as Frank himself remarks in his tribute to his mother this weekend, she was a brilliant and marvellous woman. In the years of my early adulthood, I was hungry for models, and through her books she taught me one good thing after the other. I’m so grateful for her role in my life.

Here’s one lesson in The Tapestry, from the first hours of her honeymoon, that I’ve thought of often in the 30-some years since reading it, and have had my share of occasions to try to emulate. Edith writes of how she and Francis left the wedding festivities and stopped at a drug store to cool off with a milkshake. She was wearing an elegant white going-away suit she had sewn herself.

…then when swirling around to get off, I found that someone else’s milk shake had been spilled on the stool. My skirt was hopelessly stained with chocolate milk, ruined….that stained skirt kept going through my mind’s eye, with all the carefully hand-whipped seams and Paris-couturier type of work I’d done on it… It was a vivid first lesson..of the basic fact of relationships –that people matter more than things!…I had started to make a fuss about it, but…I stopped short and didn’t mention it again. Stopped in mid-air, so to speak, I had made a decision that was not perfectly kept in our lives together, but which was made time after time. The decision was to stop, try to recognize the total value of what was happening, and make a deliberate choice that the broken, torn, spilled, crushed, burned, scratched, smashed, spoiled thing was not as important as the person, or the moment of history, or the memory.

9 thoughts on “A gesture and a death”