A few words in praise of my sisters, two in particular, who have recently given me a great gift.

At first I was the only girl child among brothers, four of them by the time I was eight. The longed-for sister arrived at last, followed by two more. The girls were cute and lively and I loved them. Because of the years between us, however, they were not the sisterly confidantes I’d wished for. They were more likely to be getting into my precious things. I learned later that they weren’t always thrilled with me either, especially when I bossed them as if I were their extra mother. We all grew up, however, the differences in age collapsed, and we’ve enjoyed warm relations as peers. We added four sisters-in-law as well, all of us bonded within a shared extended family.

The backstory here is that for the last 25 years or so we have lived close to my parents. We saw them through retirement stays in several apartments, then through my father’s diagnosis and eventual death from Alzheimers, then through my mother’s various hospitalizations and transfer into a nursing home, where she has continued to decline physically and mentally. Circumstances took other family members out of Manitoba so that my husband and I were her only children here. Our own children scattered to other parts of Canada as well. My siblings came to visit and were always supportive, but the fact was, we were the front-line people. 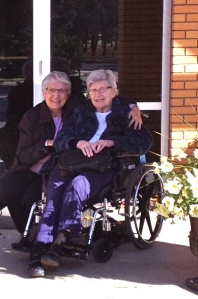 Mom and me at her new home, Mennonite Nursing Home in Rosthern, Sask.

My first reaction to this offer was awe at the huge possibility that had suddenly opened up to me. Mom and the eight siblings agreed to the move. Last week, we accomplished it. My emotions have been a thick mix of relief and grief and guilt (I’m still the oldest sister, after all, so should be responsible to the end, right?) and forward-looking-happiness. Plus gratitude for these two amazing women, my sisters. I have a very good idea of what’s been shifted from my shoulders to theirs, and it’s not so much about time or hands-on care as it is the continuous awareness of the other person—the elderly person—in the vicinity, a presence that represents something significant and thus requires something. What it represents and requires is ongoing relationship which yields joy, but is never a light thing either. Sometimes, in truth, it feels heavy. And now they’ve taken it on and I praise and bless them for it.

Four sisters. I’m second from left; the two on either side of me are the Saskatchewan sisters now close to Mom; sister on right lives in B.C.

13 thoughts on “In praise of my sisters”