First, about the two-week volunteer adventure, which we don’t want to forget. End of November, H. and I drove down to Lake County, California for two weeks, to serve with Mennonite Disaster Service, which is re-building homes for a community devastated by wildfires. When it comes to construction, H. is the experienced one of the two of us, of course, but there was plenty for me to do too, whether go-fering at the work site or helping the cook, a longtime friend from Winnipeg. We enjoyed the camaraderie of a diverse and interesting team, and when someone asked (“if it’s not too early to ask”) whether we might do another MDS assignment, we said Yes.

The couple for whom we were building was very much involved with the build, and so grateful for the help. They had literally minutes to get away from the blaze that reduced their previous home and possessions to ash. Lake County is California’s poorest county, and this circumstance has significantly traumatized the community. We were amazed at the courage we witnessed, however, and also at what various groups within the community, with which MDS partners, are doing to bring “beauty out of ashes.”

On the weekend, several of us drove to Fort Bragg and enjoyed the magnificent Pacific Ocean, and I don’t want to forget that either. There is something deeply nourishing about the endless formation of waves and the pound of surf.

Near the end of our two weeks we got a big surprise, which we’d just as soon forget. Dear husband had a heart attack. I won’t do the play-by-play except to say that someone commented later that people are often in denial about the symptoms that manifest, and I would say that it wasn’t denial as much as simple ignorance. Chest pains? Must be the muscles stiff from being used in different ways. Vomiting? Must be a touch of the flu. Fortunately, as everything increased and converged, we were able to get to help in time, where we learned what was actually going on. H. was stabilized and transferred by ambulance to a larger, excellent cardiac centre where a stent was put in the blocked LAD artery. With the blood moving again, healing could begin. And eventually he was discharged, and eventually we came back to our cozy B.C. home. (So grateful our daughter flew down to help me drive back.) And H. is doing well. 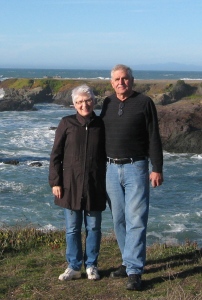 So that’s what it is. It is what it is: this is the philosophy I’ve learned from one of our sons. We continue to process what could have been, what is, and the implications. I do this via journalling and reading. I’ve noticed a bit of feistiness within myself though if anyone ventures suggestions about purpose in this. Frankly, I can’t see any at the moment. And why should I? (I think of our ruined-by-fire new friends.) And if we’re going to involve God, where purpose ultimately resides, maybe it’s not ours to know in any case, except for ultimate good. And love.

Which isn’t to say there aren’t many mercies to open to and note. What we longed for and needed and sometimes also experienced in ways usually subtle or small, was presence. God-presence. People-presence. I’ve not been thrilled about American politics, but believe me, we encountered angels in America, again and again. I would feel alone, then suddenly, was not so alone. I want to remember that too.

What has been your experience of presence when it is what it is and not an Is you wanted?

14 thoughts on “A volunteer stint, and a stent”