Today, a post in praise of long-time CBC program “Writers and Company” and its host Eleanor Wachtel, a woman I have come to trust without reservation for her wide-ranging eye on the world’s best literature and her exquisite interviews with the people who produce it. I’ve heard interviews with writers in a variety of formats, live or recorded or on television, and sometimes they’re too short to allow for more than sound bites or perhaps the interviewer hasn’t read the book, not thoroughly at least, or is talking too much, or you wish you could jump in and ask your question because the interviewer isn’t getting around to it! Wachtel’s interviews, however, are an hour long, and the conversation has room and it’s rich, it gets where I also wanted to go without my knowing in advance where that was. 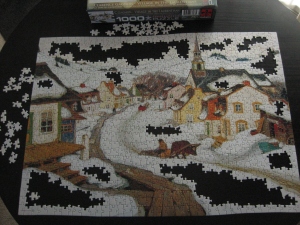 I got to thinking about this — and feeling the gratitude — because of a lovely Sunday afternoon yesterday between leftovers at lunch and the anticipation of supper with friends, sunshine radiant over the round table in the corner of the living room where I was trying to close gaps in snow in a jigsaw puzzle of Clarence Gagnon’s painting, “Village in the Laurentians,” one slow white piece after the other, thus the perfect time for an episode of “Writers and Company.” (I no longer listen to the show when it airs on the radio, I don’t even know when it runs, to be honest; I simply choose the latest or from the archives at the website.)

Yesterday I chose Wachtel’s interview with prize-winning writer Kapka Kassabova which aired February 9. I was moved by the discussion of Kassabova’s recent book, Border: A Journey to the Edge of Europe, the whole notion of borders, their fascinating power, sometimes “benign” or sometimes “lethal,” soft for one side perhaps and hard for the other, their critical role in history and no less so today. (And how intimate radio, or its iteration as podcast, is, just voice/s, close.)

Kassabova grew up in Bulgaria with a profound awareness of the fearful border line that kept her and her compatriots in. After the fall of communism her family emigrated, which required Kassabova to re-make herself as it were in another country and language (she currently lives in Scotland), but then, as recorded in this book, she travelled back to Bulgaria to explore those borderlands and what had happened in them. She said something that startled me: the stories may be told or not, but the land holds the trauma.

When the hour ended, I checked my local library website, and yes, they have the book, but obviously others listen to “Writers and Company” too; all copies are in use. But never mind, I put a hold on it, and besides, Rachel Seiffert’s A Boy in Winter has just arrived for me there, this a book and author (a British novelist whose grandparents were German Nazis) also discovered through Eleanor Wachtel, via an interview aired about a month earlier.

I thought about other writers I’ve learned about or learned to know better through Wachtel, and their memorable books — recently Rose Tremain, Sherman Alexie, Edna O’Brien, Julian Barnes, Chimamanda Ngozi Adichie, and longer ago, Peter Stamm and many more. My gratitude includes the writers who reveal and stimulate and inspire, of course, and it’s true that Wachtel is only catalyst, but she’s vital to the process, draws them it seems, because of her obvious deep reading of every writer she interviews and her intelligence and the way she listens. I’ve never heard her interrupt, and there’s always just the tiniest pause before she asks her next question, which creates the sense that she listens to the end of the sentence and honours it.

Do you listen to Writers and Company? Is there an interview you remember and recommend?

4 thoughts on “In praise of “Writers & Co.” and Eleanor Wachtel”