Walking this morning, I was thinking about grief, how it progresses through time and changes.

When my husband Helmut died in February 2021, I kept a kind of visual journal of grief, for even though I generally traffic in words, that activity helped me represent what I was feeling. For example, on a day in which I’d been busy with a variety of activities and then, afterwards, found myself overwhelmed with aloneness, though not crying, I expressed it as my upper body full of tears.

Eventually, however, the 98-page sketchbook was full, and by then it was November and less was “new” in the experience of grief. The first Christmas passed, and more crucially for me, New Year’s, which I approached with dread because the year in which he had still been alive would then be finished. The first anniversary of his death came and passed as well, which also signalled changes.

For an entire year I had found myself unable to move his keys from the ledge where they had always waited when not in use, but now, finally, I hung them on a hook under my jacket, as a spare set in case of need. Also — and I’m not sure why — I began after a year to sleep on “his” side of the bed. (Of course, alone in a queen bed one can push into the middle or all over as much as one wants, with no one pushing back, but I’m talking about the side of getting in and out.)

People with experience of grief told me the second year could be harder than the first. I don’t know if harder is the word for me, but certainly there are new challenges and questions. There’s a brutal finality that still confronts me, which no “magical thinking” of keys or leaving his side of the bed open could dissuade, nor moving keys or switching sides accomplish either, a finality that seems the more brutal because of how persistent is the disbelief around the truth that this is how it is. The challenges are the questions involved in shaping a new existence in the face of it: Is there anyone who truly needs me now? Who is witness to my life? Since I’m still here, what should I be doing with this time?

If I were to sum up the first year visually, it might be thick vertical lines — lines of grief, say in purple, alternating with thick lines, say in green, of going on, as in coping and adapting. This, then this, then this. To sum the place that time has taken me now, I would use horizontal lines. Layers. Simultaneous. The most obvious layer perhaps what my sister, also a widow, meant when she said “you get used to it.” Doing the things of each day. There’s a solid layer of joy as well. As in my walk today, following a trail in a ditch and comprehending the subtle but rich colours of autumn grasses — cream, yellow, white, brown. As in fears overcome, and some upcoming travel to anticipate. As in my children, grandchildren, friends. As in the youngest grandchild, who, as babies do, delights me with his visible curiosity and cheerfulness. Another layer I call quest, short for the questions mentioned above. And always a layer of memories and missing, solidly in the mix though not dominating or excluding the rest of life as much as earlier. 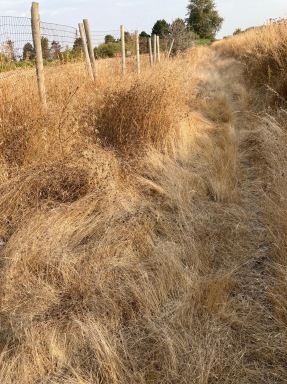 walking a trail in a ditch 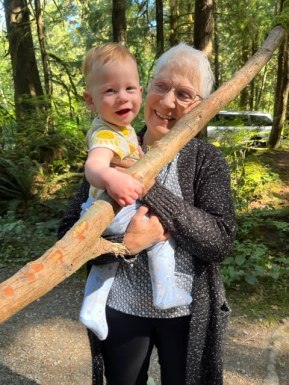 When we push through and accomplish something we’ve been afraid of, or dreading, the satisfaction at the other end is often enormous: relief, surprise, happiness, pride. Even if it’s nothing particularly remarkable in the eyes of others, it’s the doing in spite of hesitation, the overcoming of inner resistance, that makes it seem a personal triumph.

An example for me is my recent road trip to Alberta: eight days away, about 2500 kilometres. Helmut and I enjoyed road tripping, but he did most of the driving. I might spell him off for an hour or two, by which time I was tired but he’d had a snooze and was good to go again. He liked driving; I felt he was better at it than I was. I suppose it was just one of those intuitive patterns couples fall into over the years. In fact, I ‘d never filled up the car with gas until the last year of his life, when it occurred to me I might need to know how, and he showed me. He had always kept track of everything about our vehicles. Besides, if need be, there were gas stations like Domo or Co-op where I could pull in and they did it for you.

Anyway, back in winter when everything concerning summer seemed possible, I agreed to attend a school reunion with my long-time friend Miriam, and decided to combine it with visits with other long-time friends — Eunice and Ruth — in Edmonton and Calgary, as well as my grandson Ben. As July neared, however, I grew nervous at the prospect and kept wanting to change my mind! But I’d promised, and I knew I should give it a try.

And I did. Every destination I reached, thanks to the lovely guiding voice in google maps (whom I thanked aloud more than once, as if able to speak she must also be able to hear) boosted my confidence. The visits were good, and the reunion after 50 years, though a “time warp” in Miriam’s words, had its surprises and gifts. I was kept safe and returned home with the satisfaction of it all, and perhaps a little more pluck. 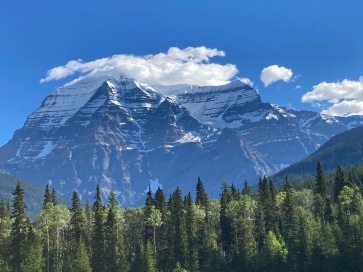 Out of quite a few, just two memorable moments: my first glimpse of Mount Robson, highest peak in the Rockies, crowned with clouds, as I rounded a curve on the Yellowhead Highway from Yalemount towards Jasper. And, finding that, unbidden, tears were sliding down my face during the grand entry (with its drumming, colour, glory), thinking especially of the women, at a powwow my photographer friend Ruth took me to in southern Alberta. 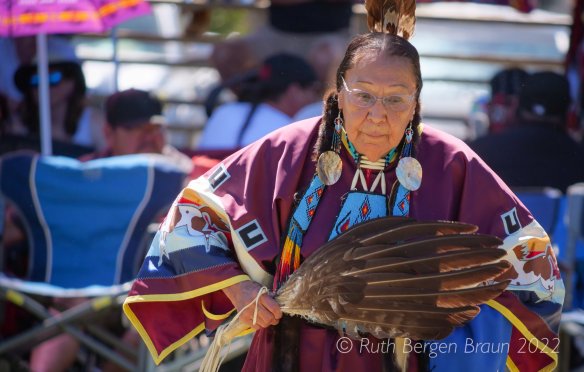 Do you have any recent stories of “pushing through” to reward on the other side?

Sometimes, looking into my journals for one reason or another, I come across bits of my life I’ve completely forgotten. In truth, a great deal of my life is completely forgotten, but you may know what I mean when I speak of bits we encounter again, how they’re like pretty stones or shells children pick up and tuck as treasures into drawers or the bottoms of backpacks, how they’re delightful all over again. 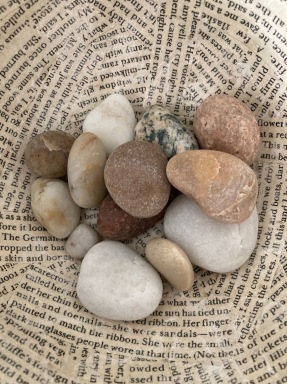 stones in a story nest

In a recent example, in my 2003 journal I saw mention of the first session of a “Writing Your Memories” class I taught at a local seniors centre. Six participants. I noted their names. (I’ve changed them here.) “It went well,” I wrote, saying further that I was drawn to the person and accent of Katharine, who had lived in India, England, and now Canada. And that Florence was rough, always ready to talk, and said she’d had polio in high school. Perry, the oldest at 84, had related his earliest memory of seeking his mother’s breast only to find she’d turned her blouse around; hence, his weaning. This reminded Alice, who complained she couldn’t hear and didn’t want to write and hadn’t realized the class was two hours long, of her own drawn-out breastfeeding as a child, and her weaning, and her refusal, ever since, to drink milk! The suggestion of breastfeeding as birth control reminded Delores of what a women who stuttered had said, that by the time she’d managed to say “t-t-t-that’s enough,” she had five children!

I paged forward a week in my journal. I’d mentioned the second class. “I felt sort of panicky, because I feel like I’m out of my league. The class itself went well–but …I’m leading people forward not knowing where I’m going myself.” Florence, I noted, told me I was a good teacher, which encouraged me, but I wasn’t sure I believed her, for to be honest, I hadn’t done much memory writing myself at that point. I also didn’t tell her I wasn’t sorry she wouldn’t be able to attend the last two classes. She was talkative, in a dominating way, and I didn’t know how to manage that.

I’d had the class make a timeline of major events in their lives, as a way of breaking personal chronology into manageable sections they could write about. Alice’s #3 on her list said “period.” She explained that she let a boy kiss her. When her period didn’t come the next month she figured she was pregnant and was so scared, she looked for a rope in the shed to hang herself. Her period came, but after that she didn’t let anyone kiss her until her wedding, when she heard the minister say “you may kiss the bride.”

“I like these people,” I told my journal. “I like people generally, I’d say!” Shy Delores. Alice who didn’t write but came anyway, talking. (“Look at them write,” she said to me. “I’d have two words.”) Perry with his long and amazingly detailed memories of a northern town in Alberta where he’d lived. Katherine with lovely memories of her Ayah in India.

I looked ahead in my journal to the next Monday and the next, but there was nothing further about the class or any of these people. My husband and I were busy building a new house at the time and I talked about that instead. Looking at these brief notations now, I remember a little — very little — but am given pleasure in what’s there, and in a fresh awareness of the vast number of human stories that exist, and I wonder if those six people got further with their memories than what they wrote and related in the class. I wonder if anyone else jotted down some of Alice’s life so she would have more than two words left behind.