This week, in the local used books establishment, I found a real treasure: Kurelek’s Canada (Pagurian Press, 1978), which is no longer in print. It contains more than 30 reproductions in colour, as well as some in black and white, of the paintings of William Kurelek (1927-1977), and also his writing about them. And all this for only a dollar! 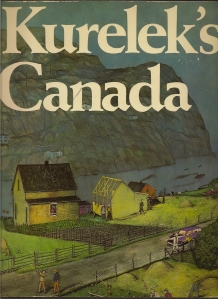 I’ve liked Kurelek’s work ever since I first encountered it, through A Prairie Boy’s Winter (1973) and A Prairie Boy’s Summer (1975), and then his wonderful A Northern Nativity, which pictures the holy family in a variety of ethnic and geographic settings — from a fisherman’s hut to an Amish Mennonite buggy to a boxcar to a soup kitchen. For many years, until they became just too faded, we had four framed calendar prints of some of the prairie scenes hanging on one of our walls.

Kurelek had an unhappy childhood in many ways and a complex relationship with his father — both hating and worshipping him, he said later. He was the oldest of seven children of a hardworking prairie couple (Alberta and Manitoba), his parents of Ukrainian immigrant origin. He was painfully shy, sensitive, artistic, but inept at those mechanical and physical things that might have earned his parents’ praise. So powerful was his desire to do art, however, that he risked their disapproval to study it.

In 1957, Kurelek risked his parents’ disfavour once again by converting to the Roman Catholic church (his family had been nominally Orthodox). His mother, he writes, was “particularly vocal in expressing her view that religion killed joy.” Yet the theme of Kurelek’s Canada is joy, he says in his foreword, “my view of joy, both remembered and observed, in this my native land.”

Kurelek was also a “message painter,” doing a series of 160 paintings on the Passion of Christ, for example, housed at the Niagara Falls Art Gallery, but there’s no didacticism in these paintings of ordinary people in the various parts of this country doing such ordinary things. They stir joy in me too, over the colours, over his sense of the land, its diversity and yet the way its parts cross-reference each other: the land in Manitoba “so flat it is like being on an ocean” and then the ocean off Nova Scotia giving him “the same feeling as the prairie in winter when the landscape is an endless series of wind-sculpted snowdrifts…”

Kurelek’s sensitivity to this country’s landscapes and history, and his sensitivity to the pleasures and dreaminess of being young, have always resonated with me. It’s as if his memories are my memories too, no matter how different the details.

But in studying and enjoying my “new” book this week, I find this artist is giving me something else. He’s giving me memories of my father. What do I mean? Well, it occurred to me that the specific references in so many of these works belong to Kurelek’s generation, which of course, is my father’s generation as well. That’s obvious enough, but I never thought of this before, because I didn’t need to, I suppose, just delighting in them for my own reasons. Now, however, my dad (88) has Alzheimer’s disease and is so very gone from us already, and in the last weeks declining even further.

I took the Kurelek book along when I went over to see him yesterday afternoon. He was in bed, mostly sleeping. When he opened his eyes, I showed him “Skating on Spring Run-Off.” He looked at it but he didn’t seem to see it.

I see it though. I see his being, his memory, there. He was a boy of the farm, a boy of hard work, close to his horses and dogs, a boy sensitive to the land and the seasons, an athletic boy too, amazingly athletic actually, and here he is again, skating where the ice is found, “skim[ming] over the prairie surface with breath-taking ease,” feeling as the artist also remembered it when he painted the scene, “as though you have wings on your heels.”

Has this ever happened to you, a familiar story or beloved artist’s work suddenly meaning something else for you altogether?