Last week, out and about driving, I caught bits of the CBC radio program “Now or Never.” The hosts were celebrating “late bloomers,” people, that is, who embark on something under the auspices of “better late than never.” I thought of my recent foray into sketching and watercolour, a late blooming kind of interest, I suppose, but which in fact I was first attracted to in 1994. That summer, 26 years ago, I sketched — in light and timid pencil — some objects around me. A pot of geraniums, a clump of bananas, my children’s ears.

At that time it seemed an antidote to writer’s block I was experiencing, as well as a wonderful mechanism for close observation. I soon concluded that in spite of my desire to do it, I wasn’t a “natural” and would need to work hard to learn. And, shortly I was unblocked and writing.

But, about a year-and-a-half ago, the impulse rose again, from its dormancy, and I bought a sketchbook to try to set down on blank paper what I saw. The first entry was a tiny oak in our Toronto children’s front yard, which I’m just remembering that I wrote about here.

Last week, I looked through my (now 3) sketchbooks, recalling the occasion of each drawing or watercolour (which I also began to try, because there were some paints and brushes at the local thrift store). I rubbed my finger on the surfaces and noticed how the colour comes away. It was cheap paint. I could let myself feel ashamed of those amateur attempts, but I don’t, because of the enormous pleasure of the wet colour sliding into place, even if badly. A year from now I’ll view my current progress and see its failings too (though the paint has been upgraded). The point is, I’m happy when I have time to try. I’ve taken a couple of classes and there’s a plethora of online tutorials. Rarely does my picture turn out like the teacher’s, but this is the glorious thing about “better late than never”: who cares? I’m learning stuff I never had a clue about, in terms of colour and paint properties, learning enough to know that I’ve only begun and that the journey forward is bound to be absorbing. The outcome doesn’t really matter.

Neither do I have a particular focus or personal preference in style yet (what we writers call in writing our voice). One day it’s loose, as in the poppies below, the next it’s nostalgia as in the Green House I grew up in (yes, I know the kids playing croquet — my four brothers and I — should be higher into the picture; I worked from two separate photos). Another day, some hours doing a tulips-in-jar tutorial, or trying on my own to capture the simple beauty of pears. 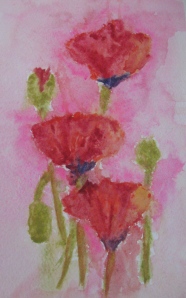 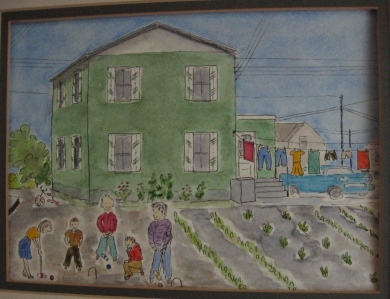 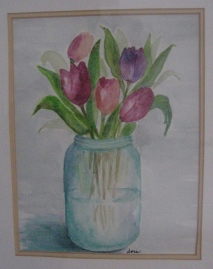 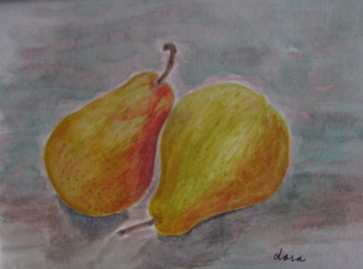 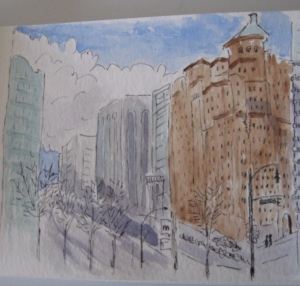 Another day (last Sunday to be precise), I went to my first-ever Urban Sketchers meet-up in Vancouver and tried my hand at a look down Burrard Street from the Waterfront Plaza, though it was cold and said hand was soon too chilled to grab any more detail.

It’s hard to articulate the what and why of it all. Enough time and latent curiosity, perhaps, converging. And no idea if the doing of it will be sustained. I’ve been wondering too whether I’m trying to express my environment or control it. For now it’s some version of see and show and tell, and better late than never.

I also blog at Chronicles of Aging