I’m home from B.C., tired and brain-full. The Renewing Identity and Mission (RIM) event I mentioned at the end of my previous post was interesting and well worth attending. It was packed with workshops — three tracks running concurrently in every time slot, which means it was impossible to attend more than a third of them.

For now, I think I’ll simply post a few notes and reflections on the opening address of the RIM consultation, delivered by Alfred Neufeld of Paraguay. His paper served as a kind of foundational analysis for much of the conversation in subsequent sessions, as well as provoking some good discussion immediately. It deserves — and needs — further discussion, it seems to me, especially when the longer paper upon which his presentation was based is available as well.

Neufeld is an educator and writer with a long list of credentials which I won’t list here, except to say that he’s one of the denomination’s leading theologians and so it was fitting, I think, that he deliver the keynote address, attempting to draw an analysis of Mennonite Brethren (MB) identity with reference to its founding in 1860, as well as posit a vision for the future. He is also, thankfully, easy to listen to.

Neufeld’s reading of 1860 (shorthand for MB origins), he said, is threefold:

-Mennonite Brethren wanted to recover the essential nature of the church.

-Mennonite Brethren wanted to recover the existential dimension of salvation.

-Mennonite Brethren wanted to recover the transcultural mission of the Holy Spirit.

Neufeld then provided a fascinating list of how historians and various members of  “the community of scholars” over the past 150 years have described the essence of the 1860 dissent that formed the MB Church. (I’m working from my scribbled notes here and apologize in advance for their inadequacy). END_OF_DOCUMENT_TOKEN_TO_BE_REPLACED

A new postcard slice as header: still Baku in Azerbaijan (on the Caspian Sea) because I want to maintain a connection, roundabout as it may be, to the current oil spill in the Gulf and the shared global sorrow of that.

(The connection is our love affair with oil. By the end of the 19th century, Baku’s fame as the “Black Gold Capital” had spread throughout the world. Between 1897 and 1907 the largest pipeline — 883 km. — at that time was built from Baku to Batum; Baku had more than 3000 wells by 1900. As I mentioned here, the Nobel brothers were the region’s oil tycoons of the region.)

But Baku in colour this time, and a view of The Boulevard and the “baths” at the sea. (It’s not colour photography as such, but was a tinted photo, creating a charming if somewhat surreal effect.)

This is one of 10 cards of Baku in my grandfather’s postcard collection. (See other postcards from his album here and here.) 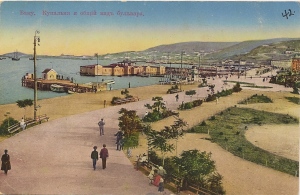 The Boulevard and baths at Baku

He served as a conscientious objector during World War I, in a provision the Mennonites had won with the Czarist government for non-combatant roles. He worked on the medical trains, transporting the wounded away from the front lines of Russia’s southern front in the Caucasus region. This service gave him an opportunity to see places he might never have seen otherwise. “Never did I dream that I would travel as much as I have done by now,” he said in one letter to his fiancee, Helena.

It sounds almost poignant to hear him continue:

After this time of rest will come a time of work… and when we have then worked for some ten years and God makes it possible for us, then we will travel abroad. The travel route is as follows: out through one of the harbours on the Black Sea, through the Dardenelles into the Mediterranean Sea, not forgetting about Greece and Italy, into the Atlantic Ocean to see the New World, and then on to England, Holland, Norway, Sweden and Germany, and back home to our peaceful home on the steppes of Russia. Are you satisfied with such a route? 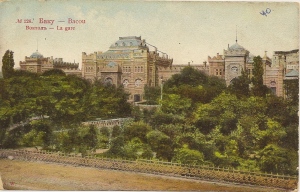 Poignant because the Russian Revolution intruded into such dreams and it would be decades before the steppes of Russia could be said to be peaceful again. Under those conditions, the  grand “tour” never happened. Heinrich and Helena were fortunate enough to travel to the New World as refugees, where they settled on a farm in southern Manitoba.

“It seems to me that everything that happens to us is a disconcerting mix of choice and contingency,” Penelope Lively said. So for my grandparents, so for the people and creatures at the Gulf.

Next week — Monday to Wednesday — I’ll be attending RIM (Renewing Identity and Mission), a consultation at Trinity Western University, consisting of some 30 presentations, taking place before the Mennonite Brethren Celebration 2010 event. I’m looking forward to it, and also to sharing bits of it later, here at Borrowing Bones.