It being the 50th anniversary of John F Kennedy’s death, we’re bombarded with retrospectives of various kinds. I’ve been tuning in to many of them. I don’t know why I’m drawn back so intensely. Perhaps I’m reaching for a time I lived through, unbelievably half a century ago already, and to a 13-year-old Me. 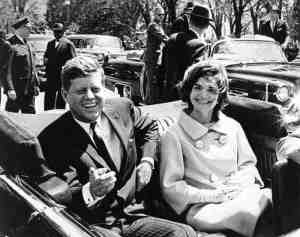 Last evening, for example, I watched “Letters to Jackie: Remembering President Kennedy.” The assassination happened Friday and by Monday some 45,000 letters had arrived to Mrs. Kennedy at the White House. Over the next two months, the number reached 800,000. Among them was a letter from me. Handwritten. In green ink as I recall. END_OF_DOCUMENT_TOKEN_TO_BE_REPLACED