My husband and his siblings knew their father had written some kind of diary in his younger years, but the notebooks were tucked away in one of the sister’s closet after the parents’ deaths. She had intended to transcribe them, but she became ill with cancer and died in 2009. After that, my father-in-law’s papers came into another sister’s possession. She set to work on them. Just last week, we received a transcript of “Papa’s Tagebuch [diary]” from December 1929 to December 1932.

For me, this is a great treasure, because I can “hear” Heinrich Dueck for the first time. My father-in-law died suddenly – his funeral was on my birthday, in fact – before we were married. I lived a continent away. All who married into the large family had come to know him, except me, spouse of the youngest. I’ve heard much about my father-in-law, of course, gathered stories, viewed pictures, but I feel a hole in my experience of this second family of mine. Here in his diary, however, is something of his voice. 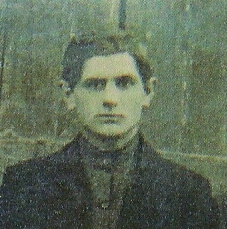 Heinrich Dueck in his early twenties (photo probably taken 1928 or 9, in the Crimea)

The broad strokes of the history, when he – a young man of 23 – was among the fortunate few thousand who got out Russia (USSR) in 1929, are not new to me. Nor the difficult years of pioneering in the Chaco of Paraguay. I researched and used this history in my first novel, Under the Still Standing Sun.

But  I’m encountering it again, through the words of a young man who would become the father of my husband and grandfather of our children. Heinrich writes quite factually, usually two to four sentences about what happened each day, but emotion lights up the corners. The almost unimaginable relief and joy of freedom once safely across the border, for example. The youthful energy, hope, and gratitude during the months as refugees in Germany. The relaxation and adventure of a month-long ship’s voyage.

On July 4, 1930, they spend their first night on the farm plot assigned the family in Village # 8, their tent pitched on unbroken campo in the midst of bush. “Here’s the place where we can say, ‘Now we are home’,” Heinrich writes.

Then, entry after entry about laboring at making bricks, building a house, breaking ground, digging wells. Entry after entry about frustrations with oxen, who run away and will not be found for hours, who break their yokes, who sit down on the trip home and refuse to go another step. About the dust, cold, extreme heat, inadequate food, endless work.

These trials are common to all the settlers, but in the cluster of villages # 6, 7, 8 there are additional trials as well. A typhus epidemic. By early November, 21 people are dead. Entry after entry, then, of Heinrich’s coffin-making and body-transporting duties.

And soon, additional trials for their own family. December 13, 1930, Heinrich’s ailing father dies. Barely three months later, on March 18, 1931, his mother is killed by lightning, inside the house, the long chain of the clock beside her melted solid as the bolt enters. Heinrich, also inside but near the window, is knocked unconscious. He will recover but at the funeral the next day, the preacher addresses him directly, reminding him that he too was struck but survived and now bears the responsibility of “elder” to his family of younger siblings. Is it surprising that between notes about recalcitrant oxen and planting cotton, Heinrich’s glints of emotion sometimes also include discouragement?

I’m reading this diary in Lent and the parallels to the Lenten prayer journey I’m following (“Where do I sign?”) seem almost uncanny. In the biblical texts, the wonderful affirmation and sense of belonging experienced at Jesus’ baptism opens to severe testing in the wilderness. In the diary, the wonderful joy of freedom and hope for a new life out of the USSR opens to a year of nearly unmitigated trial in the Paraguayan wilderness.

This second week’s text, Mark 8:31-38, takes us even deeper into patterns we all probably know too well and wish we could avoid: valleys after mountains, and a God who suffers. And he began to teach them that the Son of Man was destined to suffer grievously…

The story of Jesus’ teaching on suffering, his rebuke of Peter, and his invitation to follow – cross in hand – intertwines with my father-in-law’s story. As I reflect this week, I want to weave my own story into these  – or theirs into mine — like the three strands of a braid.

I hear the voice of Heinrich Dueck in his diary, young and tested and courageous. It draws me closer to knowing him. I hear Jesus’ voice, teaching, interacting with Peter, inviting. Will I resist, or be drawn closer? What does it mean for me, this following Christ?

3 thoughts on “Cross in hand”