We’re back from two wonderful weeks in Turkey, a trip we’d thought about taking for some time. Funny thing about me, though, as much as I’d looked forward to the trip, the week before leaving, I could hardly bear the thought of it. Whatever possessed us? and similar thoughts bothered me while I made lists and packed and counted down to departure. H. laughed at me, because it happens every time. I’m such a homebody, that’s the fact of it, and in a strange and completely unnecessary way I feel as  long as one of us is here–in this particular house we call home–our lives and our children’s will keep orbiting as they should. (The children will laugh at this too, for they’ve all circled their own places for years by now!) The minute we’re off the driveway, I’m fine. Nothing I can do about it now, I think, and since there really isn’t, I leave physically and mentally and I don’t worry about the house either.

Now we’re back, and this happens too: we’re in a daze and still overwhelmed by this thing that was two weeks in Turkey, both of us dreaming strange dreams about it nights–for which we can probably blame jet lag–and finding ourselves stuttering to answer friendly questions about how it was and highlights and so on. How was it? Great. A fascinating country. So many layers of history. So much beauty. Diversity. An excellent guide. Highlights? Istanbul, the Ataturk mausoleum, Cappadocia, Antalya, the Mediterranean Sea, Aspendos, Gallipoli, minarets (the basic shape, the variety). And more.

But the what. I’ve been thinking about the what of travel: what it is, what it does. We had some time to kill in Toronto on the way over, so I sat there googling combinations of home and travel and leaving one’s center–the stuff that always exercises me before I leave, per above–because I thought perhaps it was high time to figure out (again) why this venture had, in fact, possessed us. (Like that woman walking the Camino de Santiago who said, “They told me I’d find the answer here. Then I realized I didn’t have the question!)

I landed at quotes by travel writer Pico Iyer, and he was going on about travelling to lose ourselves and travelling to find ourselves and he said “home lies in the things you carry with you everywhere and not the ones that tie you down,” and he also said, “the state of foreignness is the closest thing I know to home.” Well, maybe for him, but for me, nope, nope, nope, and nope. But then he said (in the row of quotes, that is) that we travel to open our hearts and we come with our ignorance and we “become young fools again” and we “get taken in” and “fall in love,” all of which sounded plausible enough.

I think it’s a lot like reading a really gripping book and when you lift your head from the last page you realize it’s dusk and the house is cold, that’s how thoroughly elsewhere you’ve been.  Or watching a powerful movie and you step out of the theatre stunned and disoriented, and then you think about the story for days. Book or movie, it touches you and takes you in new directions, in terms of your inner life or knowledge or actions. You’ve been immersed in another story, not your own. But then when you’re done with it and home again in your life, you discover that other story has come along and is part of you.

Oh to be as wise and witty and holy a fool as Nasreddin Hodya, Turkey’s legendary trickster figure!

Travel (for me) leaves home. Lines of coaches disgorging tourists with their cameras and varying degrees of ignorance and misperception can be caricatured easily enough, but nevertheless, a tour is a narrative, a choreography of getting on and off and looking and listening and eating and sleeping, of landscape and ruins and wonders and other people, a story of short intense chapters, and it’s not the home-ness of it that renders it so compelling, but the un-homeness of it all, the wrenching away into another account of life altogether. Love, like Iyer said, and its “heightened state of awareness.” Then it’s over, and you’re home, and you realize you’re still in thrall to it, you’ve been taken in, you were younger for a while. Young happy fools, you are, beguiled by the complex story of another place, which you’ll be thinking about for quite some time.

Below, if you’re interested, 16 photos as a tiny peek into our trip, along with the reason I selected each.

Because this view of Istanbul from the Topakapi Palace isn’t quite focused properly or it was hazy or something, but to me it looks kind of painterly and mysterious, even otherworldly. 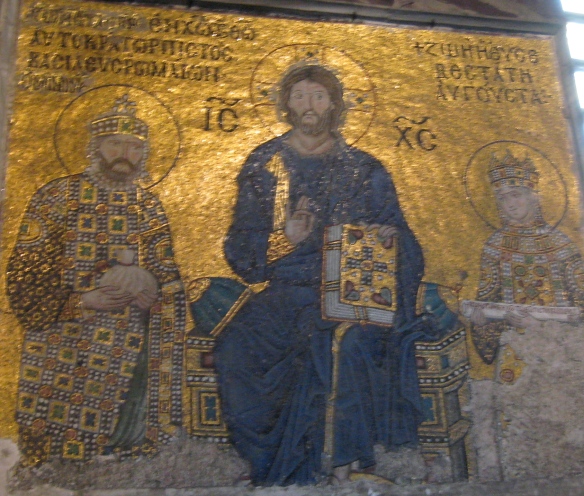 Because I’m curious about the woman on the right of this mosaic in Hagia Sophia, Empress Zoe, and her sister Theodora: powerful women, I gather, and also powerful rivals.

Because, while I’m not fond of Turkish Delight,it certainly looks appealing.At Istanbul’s Grand Bazaar.  (Sudden thought: Was C.S. Lewis being subconsciously or consciously racist by having Edmund switch loyalties from Aslan to the White Witch over his desire for Turkish Delight in “The Lion, the Witch, and the Wardrobe”?) 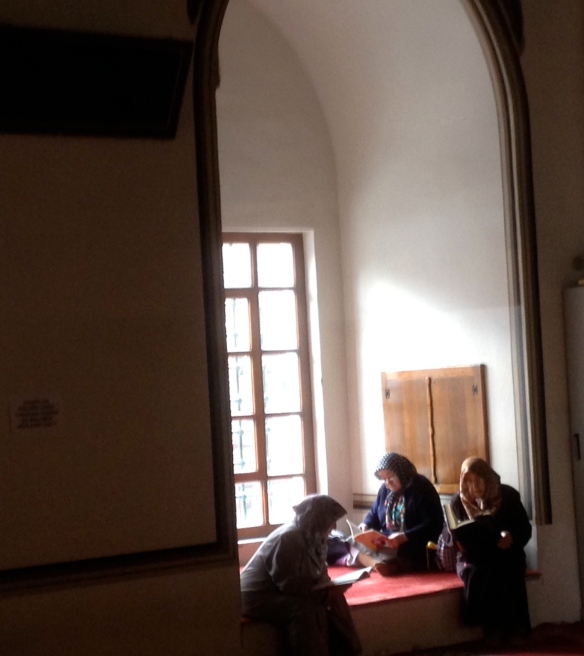 Because I love this scene of three older women reading in a window nook in Bursa’s Grand Mosque. I see individual devotion but community too, concentration, intention, purpose, beauty. H. grabbed this for me on his cell at a bit of a remove after I had spotted and was intrigued by them.

Because the mausoleum of Turkey’s “father founder” Ataturk is impressive, and because I love the color of the stone. Like earth and grain and sun all mixed together.

Because you see pictures of him –Mustafa Kemal Ataturk, founder of the Republic of Turkey–everywhere.

Because it’s Goreme, site of the fascinating rock chapels, in Cappadocia, and because the guy lower right was part of our group. (Tourists like to buy hats),

Because this Turkey trip was our 40th anniversary gift to each other, and here we are, so far so good, at the family grouping in the Valley of the Fairy Chimneys, Cappadocia. 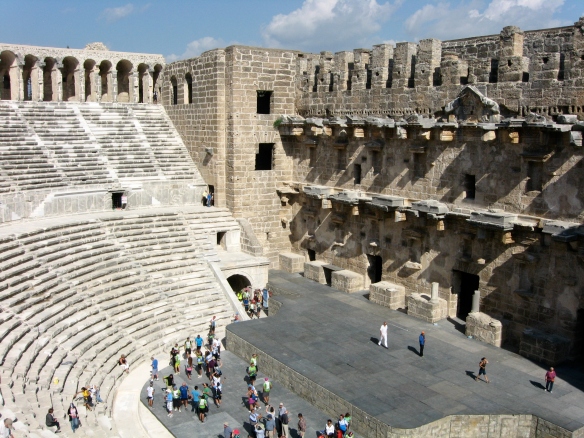 Because this old Roman theatre at Aspendos was amazing. (We saw a lot of ruins, most of them more ruined than this, however.) 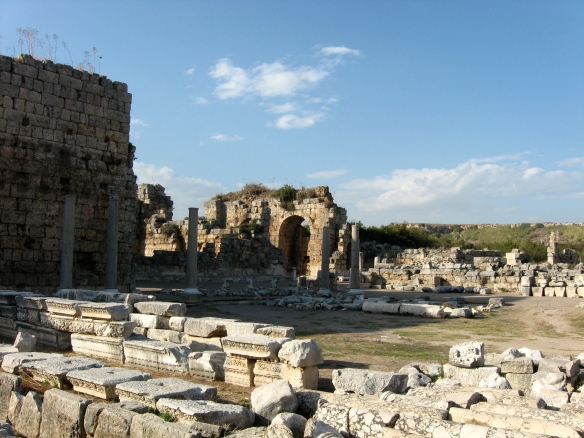 Because we really did see a lot of evacations and ruins of earlier civilizations. These are Roman and at Perge, I believe. 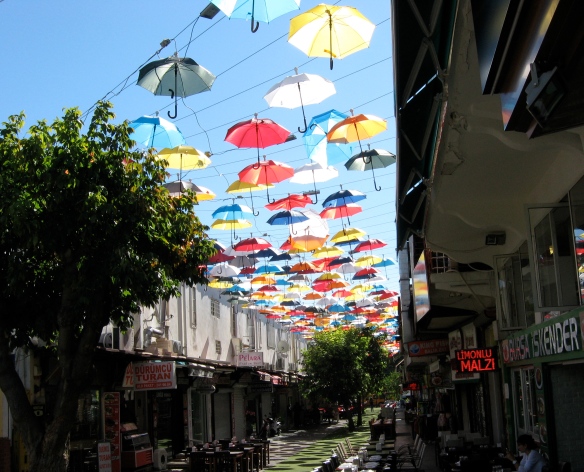 Because this scene in Antalya was so pretty, and the weather was warm and sunny and it was a day at leisure in which we wandered around the narrow streets of Old Town and made some interesting discoveries and later that day, swam in the Mediterranean Sea.

Because it’s the Mediterranean Sea and I grew up on its blue on Sunday school maps, and now I was in it, here, at Antalya.

Because I like biblical Philip, and this, apparently, is his tomb; in Hierapolis.

Because the war memorials at Gallipoli — both Turkish and Anzac — were emotional (feelings of both sadness and anger) and I’m interested in what families chose as epitaphs for their dead sons.

Because I’m still smiling over this one: she was an old woman, clearly, an old, hardworking, peasant woman, when she suddenly whipped out a cell phone to answer it and sat down to chat. But why not? Why shouldn’t she have a cell phone before I do?

Because minarets feature so frequently. These two, for example, from a mosque on the Bosporous.