I meant to gather some reflections on winter, sew some meaning through them as a Christmas wish for you, my readers, but already I know I can’t pull it off. So how about I just hang a string of disjointed thoughts (in mostly muted colors) and thank you in advance for receiving them as is.

On Sunday we got the terrible news that our nephew’s nine-year-old son in Paraguay (where my husband’s family lives) was killed in a motorcycle accident. How these things happen: the father and his son riding home after a bit of a visit elsewhere in the (farming) village, the mother emerging from their driveway in the car at the very moment they reached it,  he braking, the bike flipping and the child was under it and with a last gasp his life ended. The funeral was this morning. The father is the age of our oldest son, they played together when we lived in Paraguay, they have children the same age. “There are no words I can write that will make this better,” our son wrote his cousin, “but please know that you are in our thoughts and prayers.” There are no words indeed.

Among the details we’ve received about the accident are the last minutes of the boy’s life. Death shines an intense light on such moments just before it comes! While his father visited, the boy played with the hosts’ dog, throwing him a toy to fetch and bring back. The game delighted him. When it was time to go home, he thanked the neighbors–and he thanked the dog!

Last evening I happened to be reading an article about Chesterton on joy. He defined joy as the reaction to the fact of existence. Such joy, he said, is a characteristic feature of childhood; a child sees the world in the light of an “eternal morning.” Childhood, for him, wasn’t about a foundational stage of development or a “fairyland” from which adult life descends, but rather, in its “response to existence as sheer gift, through wondering joy” was the key to ontology (being)–a gift received “with the dawn of consciousness itself” and remaining, though easily obscured, as “the proper criterion for adult sensibility.” I’ve recently seen this joy in our grandchildren and I can tug back to such moments myself, as a child and since. And now, though no words can bring him back, I’m inspired by the joy highlighted by a dog and boy at play. My wish for 2015 is to seek more intentionally for this gift: “this submerged sunrise of wonder.”

Working darkly through the grief 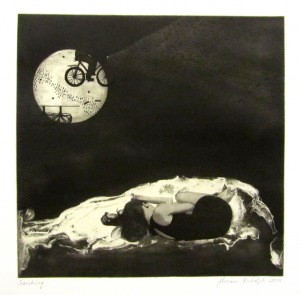 I’m including the image–in small–of a recent piece by artist Miriam Rudolph, because of what it says about grief (Miriam lost her beloved father, also in an unexpected accident this summer) and to coax you to her blog where she posts and talks about work in progress, especially (understandably) some darker work of late.

The image and her title “Searching” remind me of something Heather Plett wrote in a recent post called “Going Dark”:

All around us (at least in the Northern hemisphere), the world is slowing down and getting darker. The animals are going into hibernation, the trees are settling into their dormancy, the snow is covering the earth in a blanket of softness, the sun is moving further and further south and leaving us with longer hours of darkness… In this season of fading light, ask yourself what treasures are to be found in darkness.

A poem fragment helps, as does snow

I generally like the northern winter, with its unique opportunities to hibernate, but I found autumn especially sad this year–simply too soon–and then we’d been in B.C. in November where it was mild and still in pretty-fall mode and returned at a bleak time here…well, as we Winnipegers complain every year when winter comes: “I’m not ready!” I soon realized, however, that it wasn’t lack of readiness within me as much as deep resistance. Resentment. During this time I was asked to blurb a collection of poems by the late Esther Martens Regehr, and just like that, several beautiful lines from her poem “White Absolution” cleared my heart. She’s speaking here of snow (flakes):

a healing skin settling
over autumn’s raw wounds.
Throw yourself
on their soft mercy,
raise your arms
in surrender: see the outline
of a divine messenger…

To which I simply must add another image by Miriam Rudolph, her Christmas card this year: a messenger in black and white, for wintery times… 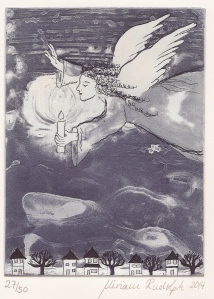 And lastly. Dustan Hlady, a young writer and teacher from Moose Jaw, who writes for the new online magazine Citadel contacted me some weeks ago. He’d read my long short story (aka novella) “Mask” in The Malahat Review and wondered if I’d be interested in doing a phone conversation with him for a “podcast article”. Sure, why not? I’d never done a podcast conversation before, and I think it was one of his first at well. It was a pleasure to back-and-forth (aka ramble on my part) though I haven’t had the nerve to listen to it myself. There was a fair bit of laughter, I recall, when he invited me to play a little story-making game, one he used to play with his brothers. Apparently it was a great success when they did it. So he began. “The”. The? Dustan, Dustan, what kind of beginning is that? So I’m looking madly around, trying to think of a good noun and all I see is the mug that holds the pens on my desk. “Mug”. So we’ve got “The mug…” Let’s just say the story deteriorated even further from there. But it was fun, and my thanks to Dustan for the conversation, and wishing him all the best in his writing endeavours.

10 thoughts on “A string of December thoughts”