High time for me to show up at my blog.

High time? It means “the time that something is due (bordering on overdue)” and alludes, I learn online, to the warmest part of the day, when the sun is highest in the sky. Which, gauging by my watch, is more or less this moment of writing, though the air is filled with smoke from British Columbia’s numerous wildfires and the sun is hidden and the light has an eerie cast.

There’s a strange eeriness in world happenings at the moment, with North Korea high in the news again, as it was just before Charlottesville and Hurricane Harvey. During that iteration of tension and high time for something better than bluster and threat and “locked and loaded,” why not buy a painting? Or a good quality print, at least? I stepped into the local thrift shop, where secondhand art of various kinds adorns the walls, and was immediately compelled by a 1996 piece by Randall Lake, who to be honest, I’d never heard of. But like I say, I was compelled by the work, both price and quality higher than often in the shop, so I looked up the artist. Turns out he’s a Utah painter of fine landscapes and portraits and also searing social/political commentary with an interesting story. The print was framed in New Jersey. I have no idea who had it before it ended up in a Tsawwassen thrift store, but we have it now and I’m very happy about it, its sense of blue and serenity and invitation—an invitation that feels like the biblical psalms of trust to me for some reason—now hanging in our bedroom. 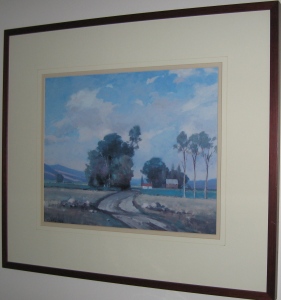 About the same time I was purchasing the R. Lake print, David Frum, senior editor at The Atlantic, noted on Twitter that in October 1962, during the Cuban Missile Crisis, his late father bought on credit a painting he couldn’t afford, figuring that if John F Kennedy could find a way to save the world, he’d find a way to pay for the painting. And, “If we’re going to die, let’s die with great art on the walls.”

High time, yes, in so many ways, but never time not to enjoy art, pick blackberries, read a book. I’ve recently enjoyed Edna O’Brien’s The Little Red Chairs (if you don’t have time to read it, do listen to Eleanor Wachtel’s interview with O’Brien) and The Tobacconist by Robert Seethaler, whose novel A Whole Life I raved about here. Both books are set in hard, high times in history.

Time too, to walk. My brother Victor Doerksen is avid for walking, so if you’re a hiker, or prefer reading about hiking while curled in a chair, check out his new blog Beautiful Feet. I think you’ll be inspired by the photos and stories.