I read John Howard Griffin’s Black Like Me, published in 1961, as a teenager. It affected me deeply. The details have disappeared, but the memory of its impact remains. We lived in a homogeneously white and rural community in Canada, but Griffin’s experience, albeit brief, as a white man who changed his colour via medicine and stain and thus discovered what it was like to be black in the segregated American South worked to inform and strengthen what I believed about equality and justice. In those years, as the Civil Rights movement took hold, it all seemed closer than it was geographically. 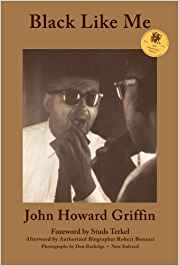 I recently re-read the book, in a 50th anniversary edition that includes additional material about Griffin’s life and work. Once more, I found it a powerful story. Over 50 years some language around racism has changed, and I suppose today he would probably be roundly criticized for “appropriation.” Certainly it’s a question to me how much it would be possible to “incarnate” another’s experience, but I have no doubt that the switch of pigment alone occasioned profound and authentic observations, and in this way, Griffin became an important in-between figure at the time. In fact, the message of the book could be summed as: I’m the same person except for the colour of my skin, yet everything about me now has become of lesser worth.

The book sold widely and Griffin had many opportunities to speak and work for better relations and understanding. Eventually he recognized that it was time for his voice to make way for Blacks, they needed to be heard speaking for themselves.

I had not remembered, if I ever knew, that Griffin was blind for a decade, only to have his sight return almost miraculously, or that he was connected with Thomas Merton and also wrote on spirituality, or that he served in the French Resistance. He mentions the latter somewhat in passing, comparing the fear he felt while black and interacting with whites, like “the nagging, focusless terror we felt in Europe when Hitler began his marches, the terror of talking with Jews (and our deep shame of it.)” It is this deep shame, expressed so honestly while experiencing “Black” as a white man, that struck me in the re-reading. When Griffin first looked at his transformed self after his regimen of medication, shaving, and stain, he was appalled. “I could feel no companionship with this new person. I did not like the way he looked.” This book is much more than a report; it’s a melancholic and disturbing and personal witness.

That my first reading noticed the plight of the Negro, as s/he was then called, and my re-reading the inner shaking and shame of the author, reminds me not only of the insidiousness of racism but how much growth is required within me, and how slowly awareness happens. Not so many years after reading Black Like Me for the first time, I was teaching Sunday School in a Mennonite church. I think it was a kindergarten age class. I showed a picture supplied by the curriculum of Jesus with children of different races. One boy said, “I don’t like the black boy. My dad says if you touch a black person you turn black.” I can’t recall how I responded but I was horrified at what the boy was being taught. Now it occurs to me that I paid no attention to the fact that the Jesus of those pictures was light-haired and blue-eyed, his skin white, instead of the brown-skinned and black-haired Mediterranean Jew he would have been.