If seven is a perfect number, it’s been accomplished this fall: seven reading/launch events for All That Belongs and in its wake, a grateful and satisfied weariness. It’s been quite a year.

It was just ahead of my January birthday that I got the call from Turnstone Press saying they wanted to publish the book, and since there was an opening in their fall list, we could — if I chose — aim for a fall release. That sounded overwhelming; usually there’s more lead time for the processes post-acceptance, even when the book is already written, but why not? I would make it a priority. So we did it, the entire team (editor, copy editor, designer, proofreader) and me bending into the required tasks.

Writing and publishing are no stroll between the roses. My first instinct when people tell me they want to write — whatever it may be — is to persuade them otherwise, which of course I don’t actually do because maybe they just have to, maybe it’s their vocation too, what do I know about their necessities? Or the story maybe only they can tell.  I’m not quite done with writing myself. But what I’m trying to say is that while there’s a great deal of joy in it — for me writing itself is mostly a pleasure — there are other parts that are more fraught.

There’s the very competitive quest for readers, which begins with somebody saying Yes, we want to publish this. A quest that can never — statistically speaking — be assumed, unless one is famous. Another scary spot, at least for me and probably many writers, is that space just after the book appears and there’s nothing more to be done and it is what it is and then one wonders if it will live on for a while or languish in warehouse boxes? And then putting oneself out there in public events and on social media, inviting and announcing and hoping not to annoy by overdoing it and hoping people will come and hoping people will buy and hoping people will read. Hoping the first, perhaps only major review, will be okay. (It was.) It’s a vulnerable time. (And if I/we sound insecure, yes, that too.)

But. done for now. (Until spring, maybe in Ontario). And so I want to round off this year that I still can’t quite believe actually happened with saying Thank you to Turnstone for producing the book, then setting up the joyous Winnipeg launch, and subsequent readings in Saskatoon, Calgary, and Vancouver, and to friends in my childhood hometown of Linden for a truly delightful time together, and to the folks at the Mennonite Heritage Museum in Abbotsford and friends and family here in Tsawwassen and Ladner, and to the writers I was paired with at several of the events. Some were small gatherings, some large, and each had a story. (Including finding myself wandering around downtown Vancouver looking for the bookstore whose address I had typed wrong into my computer and thus thoroughly lost!) I’m grateful Agatha Fast let us use her art for the cover, which people are loving. I’m also grateful to Kerry Clare at Briny Books for the honour of being one of her fall picks. (Here a short interview she did with me.)

And grateful to you — you who attended or bought or suggested All That Belongs to your library or book club (including an invitation to meet you by Skype) or put under the Christmas tree for someone else or read. Or just generally shared my happiness about this year.

Last week we spent a couple of days in the Waterloo area with my brother, street photographer Al Doerksen, and sister-in-law, artist Agatha Doerksen. First up was the opening of Agatha’s stunning new show, “Off the Wall,” at the Red Brick Cafe in Guelph. The first pieces in this series were inspired by layers of peeling posters in downtown Toronto. Agatha gathers material life wherever she finds it–lists, wallpaper, bits of text, buttons, old photos, and much more–which she then maps and collages in new arrangements. These “remnants and discards” of daily life are variously re-layered, re-configured, revealed, perhaps covered again, perhaps painted upon, but thus preserved. The result is sometimes whimsical but more often–to my view–boldly provocative, and deep. Here’s “A Single Leaf,” one of my favourites in the show. If you live in the Guelph area, do stop by to view the exhibit, or see more of her work at Agatha Fast on Facebook. 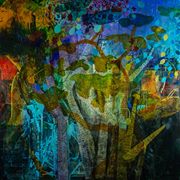 The opening itself had a layer of unexpected drama when one of the largest pieces was stolen the day before the opening. CBC told the story.